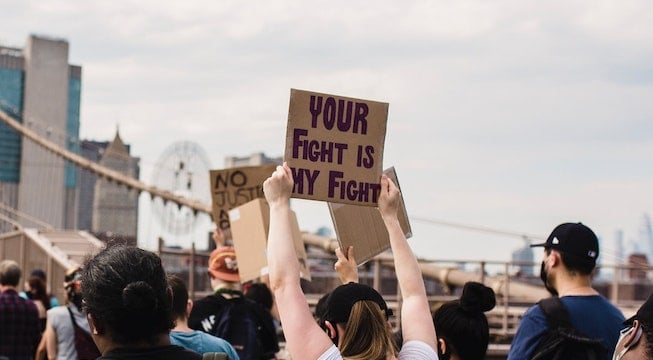 On June 17th, Drawdown New York City (NYC)—an initiative of the local New York/New Jersey Metro Pachamama Alliance Community—hosted What do People of Color in the Environmental Justice Movement Want White Allies to Know and Do.

Initially when their community first formed, Drawdown NYC had been focused on disseminating the climate solutions outlined by Project Drawdown through community events and workshops. They began grappling with how to bring social justice to the forefront of their work, inspired by Pachamama Alliance’s mission as well as Project Drawdown’s findings that equity is critical to addressing the climate crisis.

The founding members of Drawdown NYC—Keith Voos, Elly Lessin, and Elihu Dietz—had been aware from the beginning that their community would be reaching a largely White audience, and felt that it was important to expand beyond this. After George Floyd’s death, they delved deeper into this inquiry around how White environmentalists could expect BIPOC communities to heed their calls to action when at the same time, White environmentalists often weren’t listening to BIPOC communities’ calls to action. For the Drawdown NYC Community, it’s clear that a sustainable and regenerative future must include everyone, and that racial justice is a critical pathway to that future.

Keith, Elly, and Elihu were compelled by their commitment to justice to host this event on allyship, and invited Stuart Grady and Marcus Sibley as guest speakers. Both Stuart and Marcus are involved in the New Jersey Chapter of the National Association for the Advancement of Colored People (NAACP) as well as the environmental justice movement. They each offered powerful insights on how people can be more effective allies in the environmental justice movement.

Below are a few of those insights that Stuart and Marcus shared during the event.

Speak Up Against Injustice

Both Stuart and Marcus spoke about how important it is for allies to speak up whenever they witness injustice.

At the beginning of the event, Stuart shared his own experience of having been on the receiving end of a microaggression from a colleague. He spoke about the difference it made when his other colleague, Jasmine, immediately responded to this microaggression by explaining why it was unacceptable. As Stuart put it, when allies speak up, they have the opportunity to educate others, to inspire others to educate themselves, and to help someone feel like they matter.

Marcus also spoke to the importance of not being afraid to speak up, and how speaking up is part of the work of being an ally.

He went on to say that nobody is responsible for the racial injustices of the past. However, people are complicit in injustice if they remain silent when they witness it. Marcus elaborated further, explaining that allyship is work and it requires allies to be proactive in their love and in their humanity. He highlighted how critical it is for allies to act—while cautioning against putting oneself in risky and potentially harmful situations.

Both Stuart and Marcus shared their thoughts around the common assumption within the environmental movement that people of color—and Black folks in particular—are difficult to recruit for climate change causes and that they’re not taking climate change seriously.

Stuart and Marcus each made it clear that often, Black folks have been and continue to be denied access to basic resources like healthcare and education. And until people have access to these resources and have their needs met, there can’t be an expectation on them to worry about climate change.

Stuart added that organizations and groups that lack Black people and other people of color aren’t “struggling to recruit” them. Stuart explained that often, these organizations and groups—either consciously or unconsciously—are not including Black folks and people of color in their conversations. As he spoke about the importance of inclusion, Stuart offered a clear distinction between diversity and inclusion. As he put it, “Diversity is when you count the people. Inclusion is when you make the people count.”

The Importance of Learning and Listening

Marcus pointed out that many people in the environmental movement will often mistakenly believe that they have all the answers and will try to tell marginalized communities what they need to do.

Marcus encouraged allies to understand that many communities don’t need to be told what to do, but rather, they need support and resources. He went on to explain that many marginalized communities are overburdened, and traditionally, they haven’t had access to the resources they’ve needed. Marcus highlighted how critical it is for allies to be open to learning about people’s lived experiences, listening to what communities need, and then finding a way to contribute.

Many thanks to Drawdown NYC for making this event possible and inviting the Pachamama Alliance Staff, and many thanks to Keith Voos for contributing to this piece.