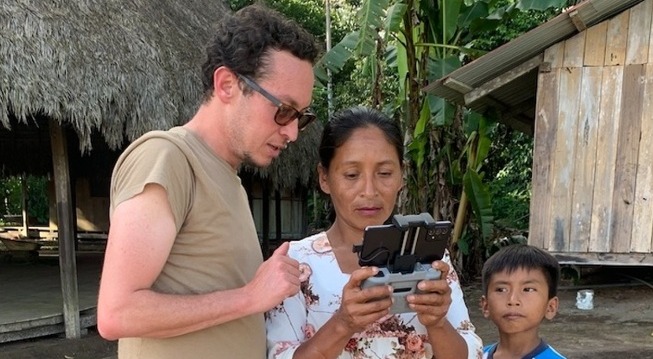 Joel Koupermann training Santa Tentets from the Sharamentsa community on how to use the drone operating system.

Last September we reported on the uncontrolled balsa harvesting in the Sacred Headwaters region of the Amazon and the plans for sustainable forest management.

Ecuador has been a leading exporter of balsa wood to world markets since the 1940s, but with increasing worldwide demand, the balsa plantations on the coast could not keep up and that demand spread to the Amazon.

When COVID-19 shut down eco-tourism activity, one of the primary sources of income for the Amazon region was lost. With ongoing needs for medicines, school supplies, and other basic necessities, many Indigenous communities were lured by balsa traders (balseros) from the outside who came to the region willing to pay cash for harvested balsa trees. Uncontrolled harvesting threatened the forest ecosystem.

A Management Plan to Protect the Forest 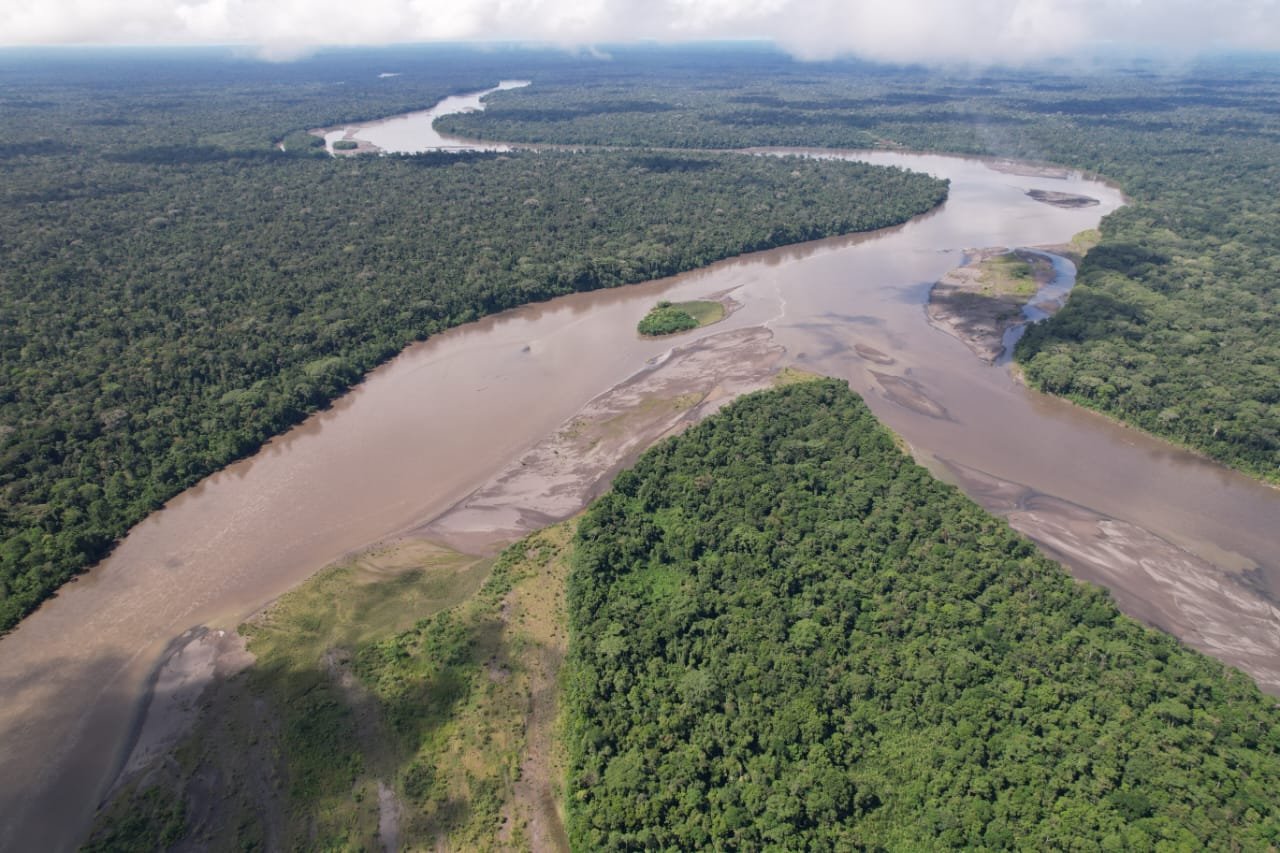 Drone footage of the forest taken during trainings.

In the last year, as tourism and travel in general has opened up into the Amazon, a forest protection fund and sustainable management plan for balsa was launched by Pachamama Alliance and Stoknes Norway, our allies from Europe, in partnership with Fundación Pachamama—Pachamama Alliance’s sister organization in Ecuador—and the Achuar.

The fund has been established and the plan is now finalized and Fundación Pachamama and Achuar communities are working to implement the first steps. An important next step of the management plan is monitoring areas where balsa should not be extracted. The Achuar community of Sharamentsa has been identified as an area that is critical to protect because the balsa groves there were largely untouched by the earlier deforestation.

In March 2022, thanks to our generous donors, we raised money to purchase GPS devices, drones and laptop computers so that Sharamentsa residents can constantly monitor the territory. They will use this equipment to develop reports to understand and evaluate the current use and management of forest resources by people within the community as well as outside the community, and will also monitor biodiversity, biomass, and more.

Training the Achuar to Monitor the Forest Using Drones and GPS

Delivery of drone and GPS equipment to the Sharamentsa community.

Now, Fundación Pachamama is committed to building the capacity of the Sharamentsa community to use the drones, GPS devices, and software that contribute to the monitoring and information gathering process.

In June 2022, the first phase of training began. Sharamentsa community members Nantu Canelos and Santa Tentets were selected to be trained in drone operation and safety protocols and the procedures for takeoff, flight, image capture and landing.

They mastered those skills quickly and then learned how to add GPS technology so that they can measure and capture data in the field and record it on accurate maps. These are going to be critical tools for monitoring and reporting on any deforestation in the region. 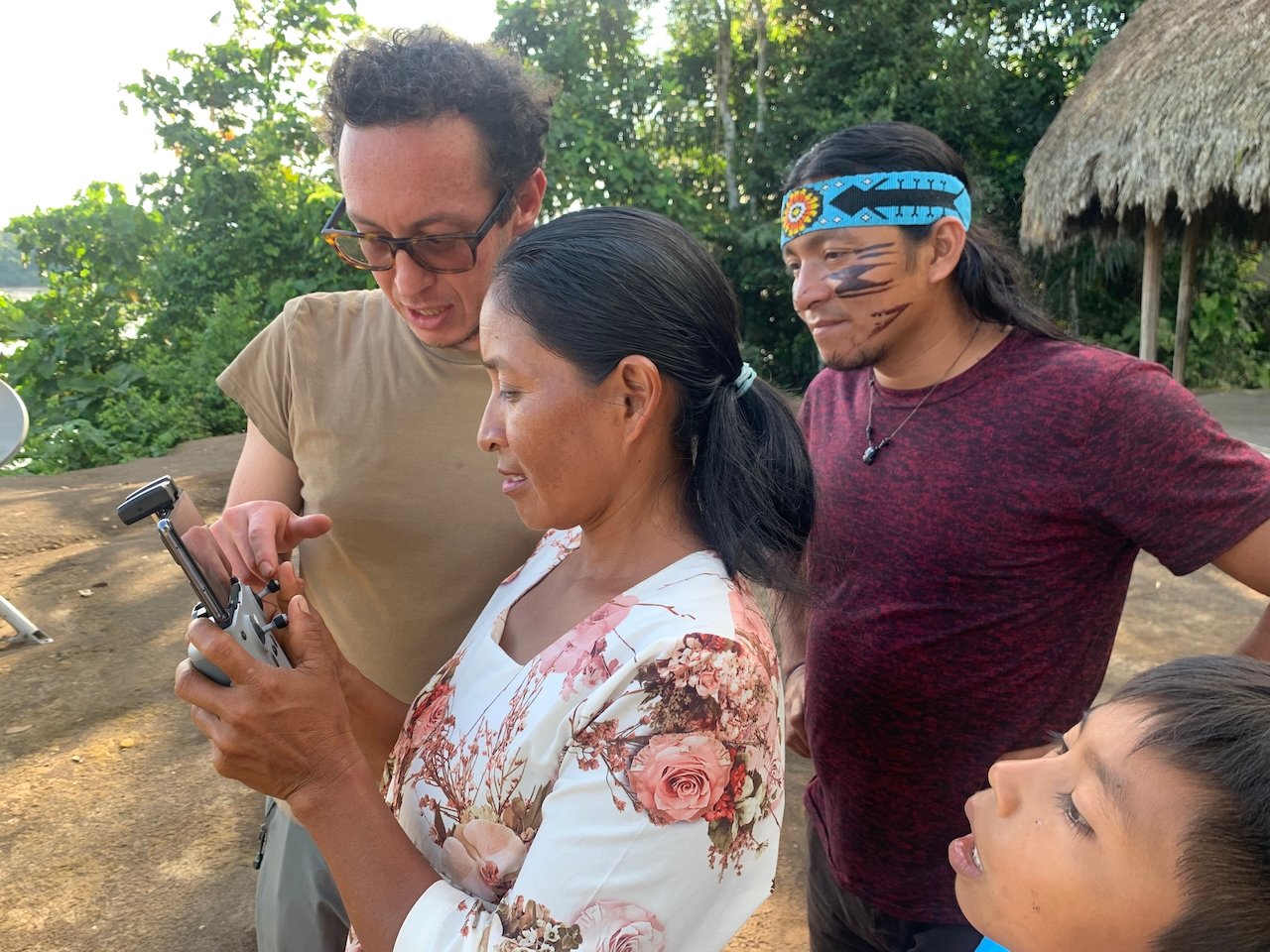