Discovering the Thrill of Democracy: A Conversation with Frances Moore Lappé and Bill Twist 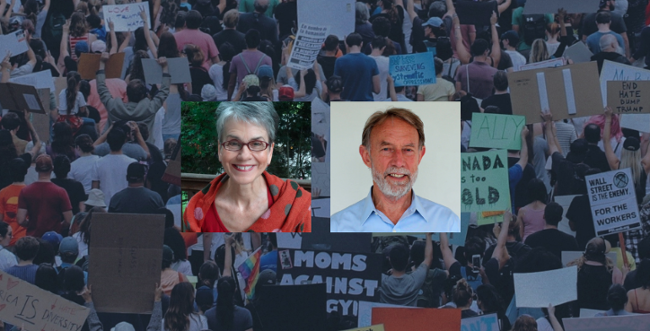 Listen to the Recording


Discovering the Thrill of Democracy

The global Pachamama Alliance community came together with Co-founder Bill Twist and author and activist Frances Moore Lappé on February 6, 2019, to Discover the Thrill of Democracy.

Bill spoke about the importance of a government that truly represents the will of the people in order to fulfill on the vision of Pachamama Alliance: an environmentally sustainable, spiritually fulfilling, socially just human presence on this planet. As he put it, “environmental degradation and growing inequality are not caused by a lack of solutions, or a lack of people with an intention to solve those challenges. It’s caused by a lack of democracy and institutional means of engaging with these issues.”

Frances shared her framework for enlivening democratic participation to bring out the best in humans. “We human beings can only flourish in a democracy, understood as the widest dispersion of power, as a culture of mutual accountability, and a culture of transparency. It is the only way of organizing lives that is really aligned with human nature.”

The two discussed the idea of dignity as the essence of effective democracy, and shared examples from their work with indigenous people in the Amazon and homecare providers in New York. “Dignity is impossible without knowing that our voices count,” Frances said. “That one is not simply an instrument for someone else’s voice. That we each have inherent worth.”

Bill mentioned a recent political success story from longtime Pachamama Alliance partner Van Jones, who partnered with unexpected allies to achieve landmark criminal justice reform, as an example of how diverse political perspectives can come together around supporting human dignity.

Connect with the Pachamama Alliance Community

Global Calls are opportunities for those who are actively engaged in creating a shift in humanity to a worldview that honors and sustains life to connect around this common vision.

Join the next Global Call for an opportunity to connect with the global Pachamama Alliance community.