Changemakers in the Amazon: A New Jungle Mamas Documentary

"The Heart of Everything - Jungle Mamas: Changemakers in the Amazon" is a documentary about our Jungle Mamas program to reduce maternal and neonatal death in Achuar territory.

In October 2014, Jungle Mamas traveled to the Achuar community of Sharamentsa to conduct follow-up visits with the community maternal health promoters (CMHPs) in surrounding communities. They were also accompanied by the organization Girls Thinking Global, an organization dedicated to connecting global change-makers to empower and educate adolescent girls and young women world-wide, in effort to chronicle the work of Jungle Mamas and make a documentary film.

Today, the documentary, “The Heart of Everything—Jungle Mamas: Changemakers in the Amazon” is now available in English, Spanish, and the indigenous language of Achuar.

This documentary was produced in partnership with Girls Thinking Global and it features the origin story behind what made Jungle Mamas possible in addition to how the program is successfully working today to reach the entire Achuar population of Ecuador (approximately 7,000 people) by training community maternal health promoters.

These community maternal health promoters, some of whom are featured in the documentary, are the women who are on the frontlines, working to provide prenatal care, attend births, and provide post partum follow-up; ultimately working to prevent maternal and neonatal deaths for families living in the most remote and hard-to-reach corners of the Ecuadorian Amazon.

The documentary chronicles the life of an Achuar woman and how community maternal health promoters provide care for them in their busy lives of child-rearing in the rainforest. Hear also exclusive interviews from not only mothers who have been attended by Jungle Mamas promoters, but also the lasting and groundbreaking impact it has had on the Achuar men. It is through this collaboration with Achuar men and women that Jungle Mamas has come to be accepted by almost the entire Achuar population.

The documentary was co-produced with Girls Thinking Global with the intention of showing just how successful a model of women’s and girl’s empowerment that values and respects local cultural practices can have on maternal and community health programs. Its intention is also to show other organizations and groups that these models do not have to be re-invented; that by telling and sharing stories, everyone can be inspired by the wisdom and lessons learned from the most remote places like the Amazon rainforest.

Covering All of Achuar Territory

To date, the Jungle Mamas Community Maternal Health Promoters have directly impacted approximately 71% of the Achuar population (approximately 5,000 people). This documentary will help us to reach the remaining 2,000 Achuar in Ecuador, in effort to meet our goal of impacting 100% of the Achuar population of Ecuador by the end of 2015. Jungle Mamas will use the Achuar version of this documentary to share with the remaining 29% of the population in Achuar communities with whom they have not yet worked, in effort to engage the communities in dialogues about why getting communities actively engaged in promoting maternal and neonatal health is so important.

By July 20, 2015, Jungle Mamas will have trained their last round of Community Maternal Health Promoters, who will be providing coverage to the remaining 29% of the Achuar population. In this workshop, being held in the community of Sharamentsa where the documentary was originally filmed, Jungle Mamas will hold a formal screening of the film and will invite all community members to participate.

Jungle Mamas has already used the Spanish version of the documentary to share with other indigenous nations who are interested in maternal health programs and women’s and girl’s empowerment. In April, 2015, Jungle Mamas took the documentary to share with the indigenous Ashaninka nation of Peru. As the program continues to expand, it hopes that this documentary will also help in potentially reaching the Achuar population of Peru, which has approximately 1,000 people. 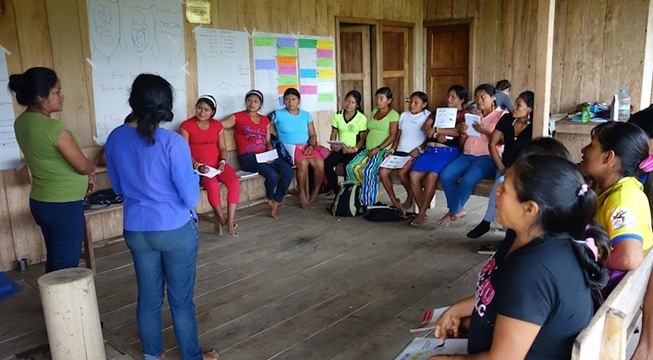