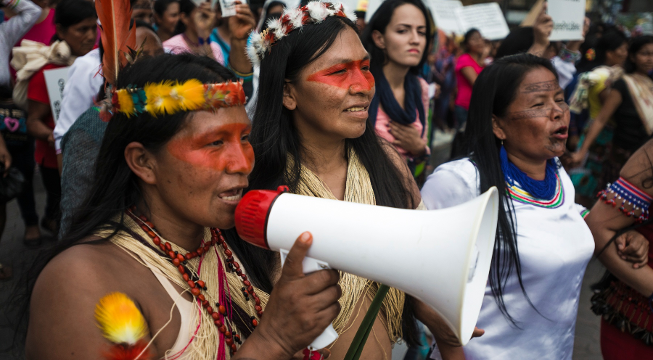 Update: Sunday night, 10/13, in an acknowledgement of the power of Ecuador’s indigenous movement, an agreement was reached where the government agreed to cancel decree 883, the IMF imposed austerity measures, and the indigenous people halted their nationwide strike. The Indigenous movement will now be a formal participant in any discussions to negotiate a new IMF agreement. Key personnel at Fundación Pachamama were instrumental in facilitating dialog between the parties. We are grateful for the support of our donors who make Fundación Pachamama’s work possible. For a deep analysis, we recommend this article by Miriam Lang, a professor at the Universidad Andina Simón Bolívar in Quito.

A message from Pachamama Alliance Co-founder and CEO, Bill Twist, who was on the ground in Ecuador, and shares his account of the protests.

You have already probably seen the news about the unrest in Ecuador. Having been in Quito when the demonstrations started, I wanted to share about this serious situation that is widely disrupting activities in Ecuador and that could potentially cause a change in government. The indigenous movement is organizing and driving the demonstrations but is not the source of the violence that is being reported.

Initially the demonstrations began as a transportation sector protest against the removal of government sponsored fuel subsidies that occurred on October 1 and were part of some financial reforms that Ecuador has promised to make in exchange for loans from the International Monetary Fund (IMF). Ecuador for years has heavily subsidized diesel fuel and gasoline (diesel fuel historically has cost a little over $1.00 a gallon). On October 1, prices of diesel fuel jumped to $2.00. On October 2, a transport sector strike began, organized by the bus and taxi companies.

The indigenous movement had been upset by a number of conditions of the IMF agreement, which, as Pachamama Alliance Co-founder and author John Perkins has so often told us, pushes for privatizing government businesses, installing business friendly reforms, generally restricting rights of workers and reducing subsidies to the poor. The indigenous people involved were also dissatisfied with the government for breaking promises about halting oil and mining projects and also ignoring other requests from the indigenous people about social reforms. Independently, the indigenous movement was planning demonstrations against the government for mid-October but decided to move earlier when the transport strike broke out.

Now the indigenous movement is the main voice in the demonstrations demanding reforms. Specifically they want a cancellation of the IMF agreement and also they want a halt to oil and mining projects, education reforms, improvement in labor rights and women’s rights, and land and water rights reforms to benefit local producers and local economies. They have a number of well-thought-through demands.

October 9 was a day of national demonstration in Ecuador called by the indigenous movement, let's hope it produces the beginning of actual dialog between the parties.