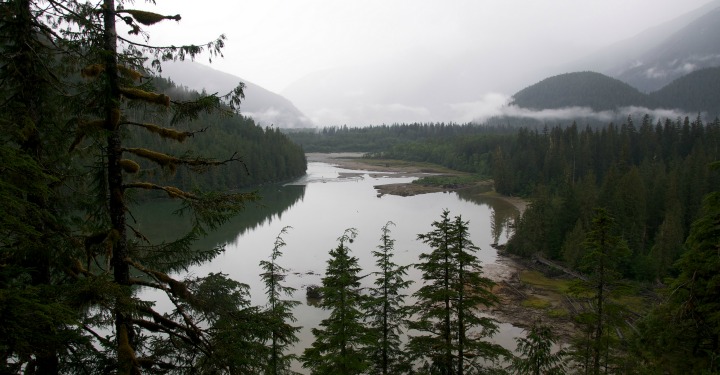 This summer, Pachamama Alliance Co-founder Bill Twist traveled to Vancouver British Columbia along with Atossa Soltani and Kevin Koenig of Amazon Watch. The purpose of their trip was to learn about the process and strategies behind the creation of the Great Bear Rainforest protected area—19-million acres of coastal temperate rainforest located between Vancouver Island and Southeast Alaska that is managed by the indigenous people of the region.

Great Bear is an example that we can use to inform the efforts to secure protected status of the Sacred Headwaters region of the Amazon rainforest in Ecuador and Peru—a project Pachamama Alliance launched at the end of 2016 in partnership with Amazon Watch and indigenous organizations of the region.

The Successful Protection of Great Bear

We chose the Great Bear Rainforest due to its recognition as a model of environmental protection, indigenous oversight and sustainable resource management. In the 1990s, logging was decimating the old growth forests of Vancouver Island and was slated to expand north into untouched indigenous territories of coastal British Columbia. Local activists sounded the alarm and rallied several influential environmental groups and the affected indigenous nations into a coalition committed to stopping the logging and protecting the area.

The environmental groups brought international attention and branding to the area and developed sophisticated campaigns to bring pressure on the logging companies involved by diminishing the market for timber products from the region. The indigenous groups formed a new organization called the Council of First Nations and brought legal pressure on the provincial government that successfully established new indigenous rights for the area. Funding for the coalition’s efforts was supplied by a number of U.S. based foundations.

After nearly 15 years of negotiations and campaigning, an agreement was reached involving the Coastal First Nations, the provincial government, the environmental groups and the logging companies, that established the Great Bear Rainforest protected area with the indigenous nations at the center of all development strategies for the region.

By going to Vancouver and meeting with indigenous groups and organizations directly involved in founding the Great Bear Rainforest, we learned a number of lessons that should be valuable for the Sacred Headwaters project.

We learned that the coalition members and stakeholders coordinated their efforts but allowed plenty of room for independent action and creativity; creating an internationally recognized brand was important to attracting outside funding and support; funding was allocated to hire the best legal and scientific advisors available; a “carrot and stick” approach (the stick being the market pressure on the logging companies) was important to bring the provincial government and the logging companies to the negotiating table; and it is important to bring together sooner rather than later all of the key stakeholders of the Sacred Headwaters project.

We also made allies in Vancouver that we will work with to advance the work in the Amazon and are planning a next visit with key players in the Great Bear Rainforest project coming to visit the Amazon Sacred Headwaters region. Learning about the Great Bear Rainforest further solidified what we already knew—the most effective way to protect forests is to support indigenous people and their rights.

Protecting the Sacred Headwaters of the Amazon

For over 20 years we’ve worked to ensure that indigenous communities of the Amazon rainforest in Ecuador and Peru have the tools and resources needed to make informed decisions for protecting their territories. To successfully protect the Sacred Headwaters, it will require even increased support for the indigenous people of the area.

Donate today to help us increase our support of the indigenous people of the Sacred Headwaters region, and to support the permanent protection of this area.