Hitomi Hazama, in the turquoise coat, celebrates winning her campaign.

37 year old Hitomi Hazama, who lives in Tokyo, Japan, has been a personal coach and has been interested in child education and permaculture. This year, inspired by the message of Pachamama Alliance’s Game Changer Intensive online course, she ran for city council of Nakano ward in Tokyo and was elected on April 21, 2019.

Wanting to Make a Difference

Hitomi knew that she wanted to make a difference in the world, but wasn’t sure how, or if she could. She took the Game Changer Intensive online course in 2017 and was inspired by its message.

Before taking the course, she felt she didn’t have the power to make a difference in the world, that her efforts wouldn’t matter. In the Game Changer Intensive, Hitomi learned that this feeling was part of a story she believed about herself, and that she could change that story. She realized that she had an important role to play and could make a difference.

Hitomi says, “All of the leaders & speakers in [the course] are so wonderful, and when I know that they are holding hands together to transform the world, I realize that I have my role to play instead of doing everything by myself.” 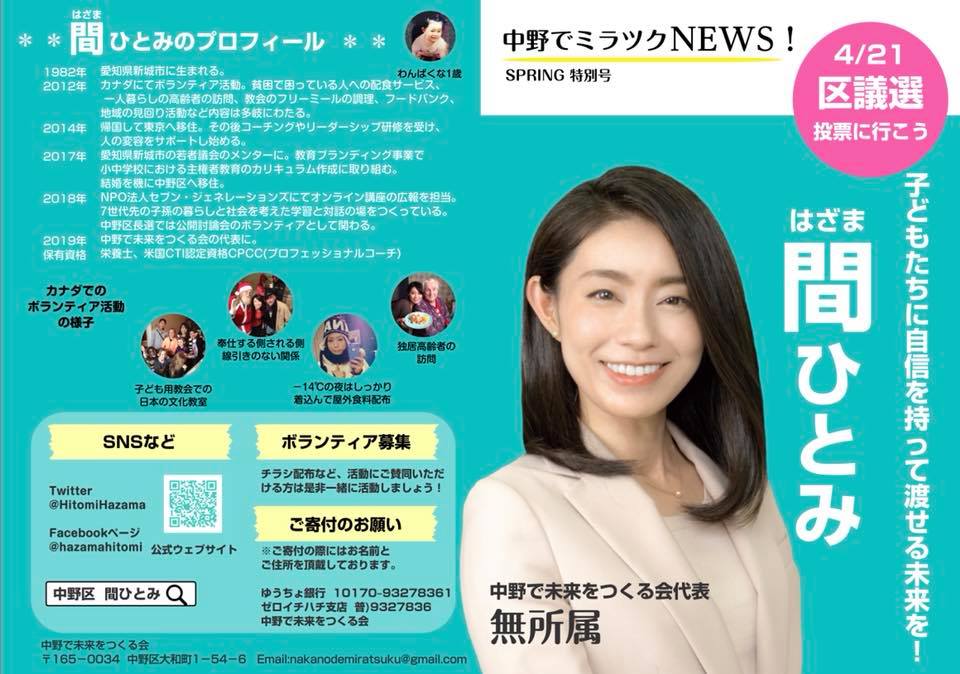 A flyer from Hitomi's campaign.

Hitomi started taking on more leadership in her Pachamama Community, and started to guide small groups of people taking the Game Changer Intensive in Japanese as a course Moderator. She was in a deep inquiry of what her contribution should be in bringing forth a thriving, just, and sustainable future, and received a message from the Earth urging her to make a difference through local politics.

While Hitomi was previously not very active in local politics, she knew that someone needed to make changes from inside the government, and that she could be the person to do it.

Hitomi says that as she faces the challenges of politics on her local city council, the Game Changer Intensive community supports her and helps her stay focused, reminding her that the people can make a difference.

Read Hitomi’s story of being elected to the Tokyo city council in her own words.