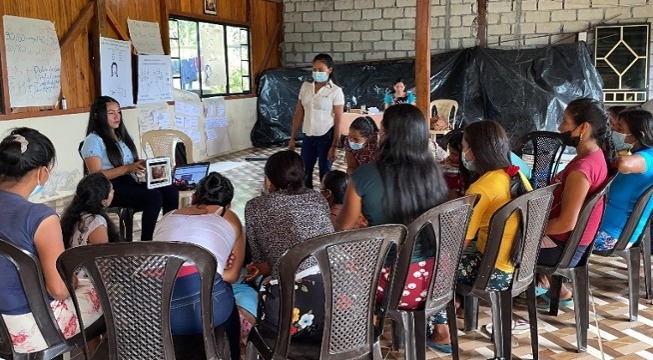 CHWs watching a video to learn how to review the placenta. The video was translated from Spanish to Achuar.

The Ikiama Nukuri team has been busy hosting several workshops addressing health and empowerment goals both with the Community Health Workers (CHWs)—women trained to educate and support women and families through pregnancy and childbirth in the Amazon—and in the communities they serve. Ikiama Nukuri has been working with several great partners this year including the Pan-American Health Organization (PAHO) in Ecuador, the Canadian Embassy, and the municipal government of the Macuma parish located in the Shuar territory.

The Community Health Worker program that has been primarily in Achuar communities, now is expanding into Shuar territory where it hosted an advocacy workshop in May with Shuar CHWs. A central theme of this workshop was identifying challenges in Shuar communities, such as domestic violence, addiction, and teen drug and alcohol use. Another theme was learning to recognize the networks of support that CHWs can find in their communities and with teams of CHWs in nearby communities. The women finished the workshop with new tools to address the problems they face in their communities.

In April, Ikiama Nukuri completed a workshop on the creation of artisanal soap with Shuar and Achuar CHWs. The women learned how to collect used cooking oil that would otherwise be discarded, potentially contaminating the rivers, and repurpose it into soap for washing clothes and dishes. The women also brought medicinal plants from their own communities and learned how to use these plants to make cosmetic soaps.

On June 15th, Ikiama Nukuri began a Level 3 advanced training workshop in Taisha, Morona-Santiago with a group of 16 Achuar CHWs. This workshop focused on family planning methods, education on sexually transmitted infections, introduced new themes on hemorrhages as well as a review of midwife knowledge previously covered in Level 1 and 2 workshops.

They are specifically reviewing topics such as safe birthing practices, prenatal exams and malnutrition. They were introduced to advanced content on hemorrhaging, listening to the fetal heartbeat, and family planning. CHWs also are learning skills like how to use basil leaves to create a natural medicine that can reduce hemorrhaging. Training in family planning methods has a focus on the Sympto-Thermal Method and fertility mapping. And there is a section on newborn examination and umbilical cord care. The workshop is being facilitated in cooperation with two Ecuadorian midwives who are animated and engaging, fostering an empowered environment where the CHWs can comfortably ask questions and learn.

On the first day, CHWs were asked to share birthing stories from their work in the community. Below is one incredible story that was shared:

“I attended a pregnant woman that did not want to give birth at home, but rather in the hospital. The day came when her water broke and later she began to bleed. I prepared a natural medicine for her because she began to lose a large quantity of blood. We made an emergency evacuation  to the hospital, where she was told that they needed to perform a caesarean section because the baby was close to dying. However, the mother did not want to have a caesarian. The baby was born with gray skin and appeared to be deceased. The doctors told me, ‘you know how to save the baby, you do it.’ I put into practice everything I had learned and the baby responded. They asked me where I had learned all of this and I told them I had learned in the training workshops of Ikiama Nukuri. The doctors said if the CHW had not been there, the baby would have died. The director of the hospital congratulated me for the work I had done.”

In July, Ikiama Nukuri will return to the Shuar territory to host a “Leadership and Community Development” with male Shuar leaders and dignitaries to address the problem of domestic violence within the Shuar communities. This workshop will be coordinated in partnership with the local municipal government.

Aside from planning and executing workshops, Ikiama Nukuri is working to assemble 400 safe birthing kits to distribute to our Shuar and Achuar CHWs. The bars of soap for this kit were generously donated through the partnership with the PAHO in Ecuador.