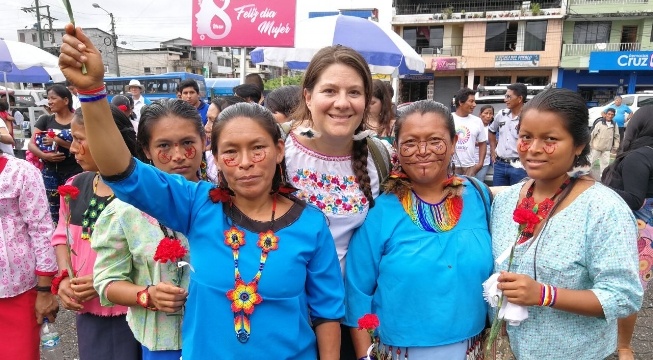 A March of Indigenous Women

On March 8, indigenous women from most nationalities in the Ecuadorian Amazon marched and demonstrated in Puyo, a town bordering the rainforest in Ecuador. These women wanted to commemorate International Women's Day, remembering the threats they suffer every day in their communities due to oil and mining extractivism.

Around 500 women from the Achuar, Shuar, Kichwa, Sapara, Waorani, Sarayaku, Shiwiar nationalities and other indigenous peoples marched in the streets of Puyo for two hours, ending in a central park where indigenous women leaders gave speeches on extractivism and discrimination.

The march was live-streamed on Facebook, and you can watch the recording here:

A Mandate to End Oil and Mining

After the march, the women went to Union Base, CONFENIAE’s headquarters, where they participated in a two-day workshop and assembly to write a mandate for Ecuadorian President Lenin Moreno with specific requests from the indigenous women’s movement.

For instance, they declared any contract signed by the government or any local authority with oil and mining companies to be illegal if they do not first have the consent of the communities living in those territories. They also demanded that the indigenous territories must be declared free from oil and mining extraction.

Meeting with the President

The women leaders then traveled to Quito, Ecuador to present the mandate to President Moreno personally. However, they spent almost five days outside the presidential office before they were finally able to meet with President Moreno’s secretary and secure a meeting with the president for March 22nd.

At that meeting the women’s demands for addressing sexual harassment and abuses against women were accepted. However, the president would not make a firm commitment to ending oil and mining activity. The women are committed to continue their efforts.

Pachamama Alliance supported the mobilization of these women from all over the Amazon to gather in Puyo and provided the lodging and food for some indigenous leaders in Quito while they were waiting to be received by the president, as well as funding for the assembly held in Union Base. This important work is only possible due to the generous support of our donors.

Donate to Pachamama Alliance so that we can continue to support the mobilization of our indigenous partners to protect their lands from extractive industries and to permanently protect the Sacred Headwaters region of the Amazon rainforest.