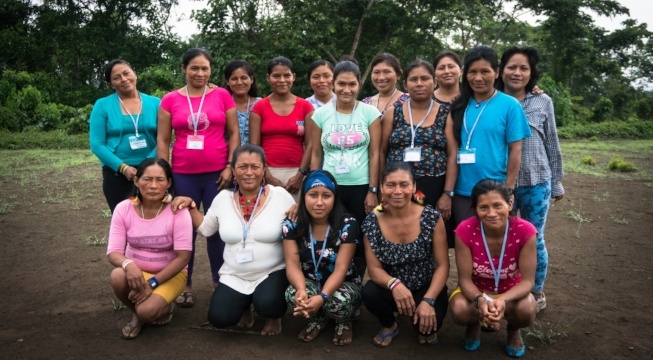 A group of Ikiama Nukuri Community Maternal Health Promoters in the Amazon rainforest.

In 2006, a retired midwife, Margaret Love, and Narcisa Mashienta—a Shuar activist and volunteer with Pachamama Alliance—co-founded the Jungle Mamas program. This program works in collaboration with the Achuar communities in Ecuador to reduce maternal and infant mortality and morbidity by empowering women and communities of the Ecuadorian Amazon to ensure safe births and to protect the health and well-being of the Achuar nation.

As an intercultural program, made up of a diverse team who speak English, Spanish, Shuar, and Achuar, it was important to find a name that would capture the vision and essence of this program. The name historically used in Ecuador by the program team and by the Achuar women themselves is Ikiama Nukuri, which means Women as Guardians of the Forest in the Achuar language. The program sees the health of the environment and humans as wholly interrelated and that the liberation and empowerment of Achuar women will bring about the mutual liberation and empowerment of the Achuar people.

Pachamama Alliance is excited to officially adopt the Achuar name for this program. Given that the purpose of this program is to build collective power among indigenous women and their communities in order to bring about improved health and well-being for future generations and the forest, the name of this program should best reflect that work. The program itself isn’t changing, we’re just changing the name to the Achuar name.

Ikiama Nukuri is a program of the Achuar people, serving the Achuar people, and thus its program name should also be represented in their language. We at Pachamama Alliance are aware that language carries power, has deep historical roots, and we believe that indigenous languages should be respected. After much deep and critical reflection, the team has made the decision to elevate the Achuar program name. We encourage all of our partners to open their minds to embracing this change.

Pronunciation of the Achuar Name

The correct pronunciation of Ikiama Nukuri is: “Ee-kee-yama Noo-koo-ree.” It might take a couple times of practicing it out loud, but do not fear! Our program staff and our team of amazing community health workers would be proud to hear that you are making the effort to correctly pronounce and articulate their language and the work that they are so deeply committed to performing, day after day. Every time you say “Ikiama Nukuri,” you are valuing Achuar culture, their language, their women forest defenders, and their collective survival as a nation!

Hear the correct pronunciation of the Achuar name from the Ikiama Nukuri team below in this special message from the Amazon.

Your donation to Pachamama Alliance ensures that Ikiama Nukuri will continue to thrive. Learn more about this vital program and make a donation today.