Move To Amend Celebrates Congressional Introduction of "We the People" Amendment

In a move that validates years of effort by Move to Amend, U.S. House Representative, Pramila Jayapal (D-WA), has introduced a resolution that would amend the U.S. Constitution to ensure it affords rights only to citizens, not corporations. Pachamama Alliance partnered with Move to Amend in 2013 in support of their efforts to bring forth a truly representative democracy in the United States.

On February 25, U.S. Representative Pramila Jayapal and 10 other Representatives joined Move to Amend by announcing their sponsorship of the “We the People Amendment”—House Joint Resolution 48—which would amend the U.S. Constitution to unequivocally state that Constitutional rights are afforded only to people.

Move to Amend has been working on this issue since just prior to the Supreme Court’s 2010 Citizens United v. Federal Election Commission ruling, which found that limiting corporate spending in elections violated a corporation’s right to free speech under the first amendment, expanding upon a long history of granting constitutional protections to businesses that dates back to Supreme Court rulings in favor of mining and railroad corporations in the 1880s. Move to Amend is now a coalition of over 462,000 people that believe money is not speech and human rights are not corporate rights.

This is not the first time that Congress has introduced legislation to limit the protection of corporations and business entities under the 14th amendment, but what makes the introduction of this resolution different it that it aims to amend the U.S. Constitution to explicitly limit its protection to “natural persons.” 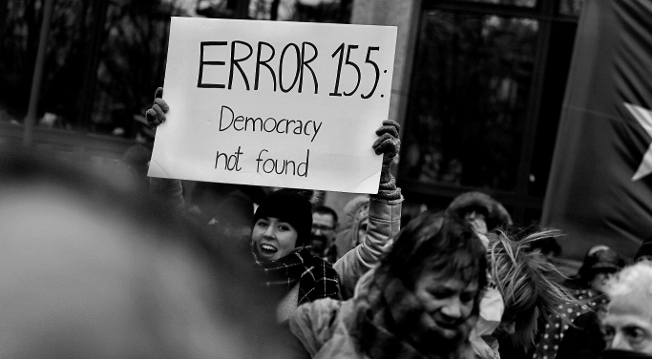 Giving corporations equal protection under the 14th amendment has resulted in inflating the power that corporations wield in society at the expense of a true people’s democracy and our social, cultural, and environmental landscapes. Move to Amend has compiled a comprehensive list of the effects of corporate rule. The nationwide effects have been so profound as to warrant 534 resolutions, passed or in progress, aimed at curbing corporate rule.

Below you can find the full language of HJR 48, and here you can track its progress. Since its introduction, 15 more Representatives have signed on as co-sponsors, bringing the total to 25.

The rights protected by the Constitution of the United States are the rights of natural persons only.

Artificial entities established by the laws of any State, the United States, or any foreign state shall have no rights under this Constitution and are subject to regulation by the People, through Federal, State, or local law.

The privileges of artificial entities shall be determined by the People, through Federal, State, or local law, and shall not be construed to be inherent or inalienable.

Federal, State, and local government shall regulate, limit, or prohibit contributions and expenditures, including a candidate's own contributions and expenditures, to ensure that all citizens, regardless of their economic status, have access to the political process, and that no person gains, as a result of their money, substantially more access or ability to influence in any way the election of any candidate for public office or any ballot measure.

Federal, State, and local government shall require that any permissible contributions and expenditures be publicly disclosed.

The judiciary shall not construe the spending of money to influence elections to be speech under the 1st Amendment.

Nothing contained in this amendment shall be construed to abridge freedom of the press. “

To learn more or join the grassroots movement to pass the We the People Amendment, visit www.MoveToAmend.org/join