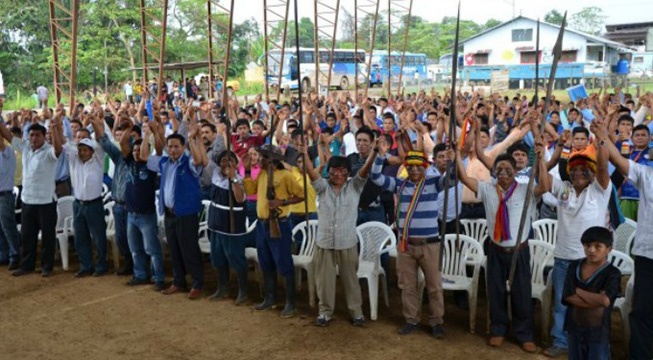 In late February, 2015, the Ecuadorian government announced the start of a consultation process in oil blocks 74 and 75 in the Ecuadorian Amazon, and in the months since then, indigenous communities have promoted assemblies and issued resolutions concerning this process.

According to Convention No. 169 (ILO 169) of the International Labour Organization, a specialized agency of the United Nations, it is required that indigenous and tribal peoples are consulted on issues that affect them. It also requires that these peoples are able to engage in free, prior and informed participation in policy and development processes that affect them. The Convention also provides a guideline as to how consultation with indigenous and tribal peoples should be conducted.

The indigenous people in the communities located within these blocks report that they were not notified about the "consultation" process for blocks 74 and 75 and that they were surprised by visits from staff of the Ministry of Oil in Shuar and Achuar indigenous communities. Community members, with support from their elected leaders, rejected the "consultation" and demanded the removal of the public officials from their territories.

Right to Free, Prior, and Informed Consultation

The current consultation violates the decision of the Inter-American Court of Human Rights in the Sarayaku case vs. Ecuador, mandating that this kind of processes must have the participation of indigenous peoples in the development of laws or they should create other measures necessary to implement the right to free, prior, and informed consultation in good faith, in accordance with international human rights standards.

This means that any legislative measure created to regulate the "consultation", such as Decree 1247—an Executive Decree issued by Ecuadorian President Rafael Correa that states that, contrary to ILO 169, the goal of consultation is not consent, but participation—must have been developed with the participation of indigenous peoples and organizations.

Due to this situation, the Achuar and Shuar organizations convened a meeting of the Committee Interferderacional in Macuma Community on March 8, 2015. About 500 people and elected leaders of the Shiwiar, Achuar, Shuar and Sarayaku organizations participated. One of the resolutions taken is "to restrict and control the entry of socializers of consultation for oil activities without endorsement and authorization of representative organizations, otherwise the ancestral law will be applied".

The Assembly of the People of Sarayaku, also resolved to stay alert in the defense of their territory, which is within these blocks. In recent months, Agip Oil has shown interest in starting operations in this area, affecting Sarayaku territory and Sápara territory. For this reason, they are in conversations to seek joint defense strategies.