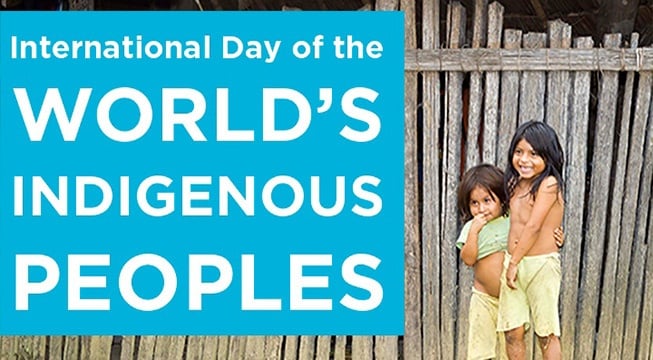 Today is International Day of the World’s Indigenous Peoples, a day pronounced by the General Assembly of the United Nations to promote and protect the rights of the world’s indigenous population.

As you know, for two decades, Pachamama Alliance has worked in partnership with the indigenous people of the south-central Ecuadorian Amazon to protect nearly 8 million acres of rainforest from oil development and other extractive industries. After 20 years, this region remains pristine and road-less.

Donate to Pachamama Alliance to ensure sure this 8 million acre area stays pristine.

We do this work because indigenous people are on the front lines working to head-off environmental destruction around the world. In a recent interview, Noam Chomsky, renowned social philosopher from MIT, praised indigenous movements saying “It’s a kind of incredible irony that all over the world the leading forces in trying to prevent a race to (ecological) disaster are the indigenous communities.”

The indigenous communities are the natural guardians of Ecuador’s Amazon rainforest, and by supporting them and their right to self-determination, we are helping to protect one of the most important and biodiverse ecosystems on the planet—one that sequesters immense amounts of carbon from the atmosphere and helps maintain Earth’s climate.

The accomplishments we’ve had in the rainforest wouldn’t have been possible without the work and support from people like you who are committed to creating a thriving, just, and sustainable world that works for all. Thanks to our donors, we have been able to consistently provide financial support so that the indigenous rainforest communities in Ecuador have been able to secure title to their lands, assert their legal rights to protect their culture and territories, and strengthen their governing federations so their collective voices and visions are heard.

Indigenous people all over the world are raising their voices and taking action, urging us—their brothers and sisters from the industrial world—to step up and join them in building and fostering a mutually enhancing human-Earth relationship—a critical goal for these times.

Donate to Pachamama Alliance today, on International Day of the World’s Indigenous Peoples, to support these efforts and move the world toward that goal.