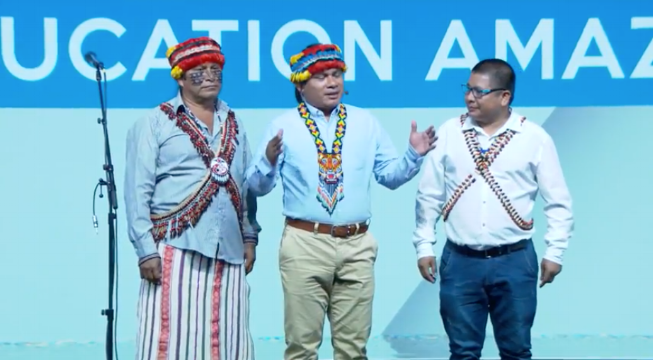 September 12 – 14, representatives from countries all over the world gathered at the Global Climate Action Summit in San Francisco, California to celebrate the extraordinary achievements of states, regions, cities, companies, investors, and citizens with respect to climate action, and to make commitments for how to take climate action to the next level. The summit featured speakers including Jane Goodall, Alec Baldwin, and Al Gore.

Representatives of our indigenous partners in Ecuador, including Shuar leader Tuntiak Katan and Achuar leader Domingo Peas, were given the opportunity to present the Sacred Headwaters of the Amazon Initiative on center stage at one of the closing plenary sessions for the conference.

Watch their segment of the conference below:

The important role that forests and indigenous people play as one key element of global climate solutions was a consistent theme of the Summit. The Sacred Headwaters Initiative and its commitment to permanently protect 60 million acres of tropical rainforest in Ecuador and Peru fit perfectly with that theme.

The attention that this project received at the Summit and the interest that was generated are important steps in creating global awareness and support that will be critical to the success of the project.