The New Threat of Mining in Shuar Territory 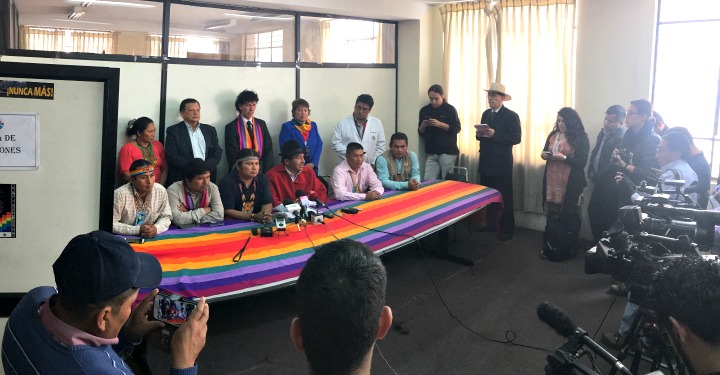 With oil prices down, Ecuador is paying more attention to its mining sector. The prime mining sites in the mountainous south of Ecuador are in traditional indigenous territory and are directly upriver from some of the most pristine and untouched indigenous lands of the Amazon rainforest. We have successfully been working over the past two decades to protect these lands and their people from oil development. Mining now is the new threat.

In August 2016—without prior notice or due process—the Ecuadorian Police evicted all of the inhabitants of the Nankints Shuar community in the Morona Santiago province in the Ecuadorian Amazon. A mining camp for a proposed Chinese-funded copper mine project was then established on the site. The Shuar people are fiercely opposed to this and any other mining projects in their territory. The community of Nankints had been established by the Shuar specifically to protect this part of their ancestral lands from any kind of mining activities.

The confrontation between the Shuar and the government has since escalated. In November 2016 a group of Shuar people took over the mining camp and expelled all of the workers. The next day the government seized the camp back. Since then the situation has grown more tense and volatile. In December, there was a confrontation at the site between indigenous groups and the police and a policeman was killed by gunshot (although it is still unclear as to how that happened).

The government then declared a state of emergency, brought in an overwhelming military presence and suspended basic civil rights including freedom of expression, assembly and transit rights for the entire Morona Santiago province. The radio stations of the indigenous groups in the area were silenced as the government is trying to tightly control all news and reporting from the region.

Augustin Wachapa, the president of the Shuar governing federation (FICSH) was arrested in a raid of the FICSH offices. He is being held in prison on the charge of inciting violent confrontation although there is no evidence to support that charge. Legal actions to gain his freedom and to end the militarization of the province have been rejected by the government.

In January 2017, in retaliation and in efforts to bargain for Augustin’s release, four army members were seized and held hostage by Shuar communities. After several days, the army members and all of their weapons and equipment were released but no broader resolution was achieved.

The government has continued to threaten not only Shuar leaders in Morona Santiago province, but any indigenous leaders who speak out in solidarity with Augustin and the affected Shuar communities. Efforts to enter into open dialogue with the government have been rejected and the conflict appears at a standstill.

Burdened with crushing external debt to China, Ecuador’s government is pursuing mining as a quick source of liquidity. In the process, basic civil liberties as well as the rights of indigenous peoples and the rights of nature are being trampled.

How Pachamama Alliance is Helping

Our main focus in Ecuador is to support Ecuador’s two primary indigenous organizations (CONAIE and CONFENIAE) as they work to raise public awareness and bring local and international pressure on the government. CONAIE is the national organization representing all of Ecuador’s indigenous people and is an important actor in shaping public opinion and driving public policy on a national level. Pachamama Alliance team members are contacting journalists, helping set up interviews for indigenous spokespeople on national television programs and other mass media so that CONAIE can powerfully make the case for indigenous rights and against environmentally destructive mining concessions.

CONFENIAE is the organization that specifically represents all of Ecuador’s Amazonian people and so is a key player in organizing local indigenous resistance and public pressure in the territories. The government of Ecuador has waged a damaging campaign over the past two years to weaken and divide CONFENIAE. The Pachamama Alliance’s team on the ground in Ecuador has been paying extra attention to provide logistical, transportation and other material support so that CONFENIAE is strong and has the flexibility to organize and host meetings and strategy sessions with their broad grassroots network of organizations and communities.

Additionally, Pachamama Alliance lawyers are providing legal defense for the persecuted indigenous leaders as well as bringing the “Nankints” situation to the attention of the Inter-American Commission of Human Rights and to several UN agencies addressing human rights issues. Plans are in place to bring delegations to Washington DC and New York over the next several months for international meetings of those groups.

A presidential campaign is in full swing now in Ecuador. There is a high likelihood that it will result in a change of political control in a couple of months. If the legal and public relations strategies are conducted effectively, a new administration should provide an opening for the successful resolution of this conflict.

What You Can Do

You can sign this petition created by our allies at Amazon Watch. This petition is addressed to the Ecuadorian government and demands an end to the militarization and to the persecution of indigenous leaders. The more names the better, so please add yours.

You can also make a donation to support our work so that we can continue to provide on-the-ground assistance and legal representation for the indigenous leadership in Ecuador.