The Path Forward in 2022: A Conversation with Bill and Lynne Twist 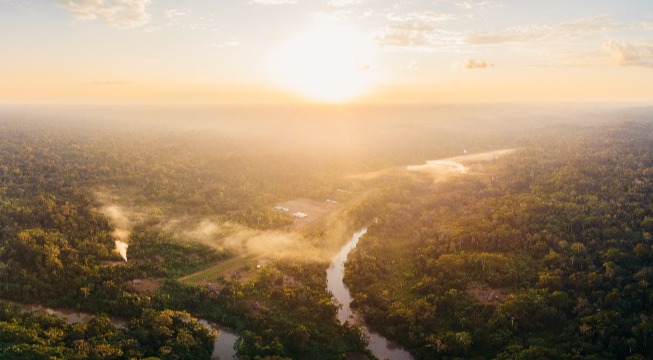 On February 10, the Pachamama Alliance community came together with Co-founders Bill and Lynne Twist for a conversation on the path forward in 2022. Bill shared a message from Pachamama Alliance’s Indigenous partners and spoke about what inspires him to continue the vital work of protecting the Amazon rainforest. Lynne shared her thoughts on the role of humanity in the community of life, as well as the importance of being guided by a vision of the future that is grounded in love.

A Message from the Amazon

Bill joined the call from Ecuador, where he was participating in a series of meetings with the Indigenous leaders who are involved in the Amazon Sacred Headwaters Initiative. During one of the meetings, Bill was asked to be involved in some of the projects that were being planned. Bill agreed, explaining that he was honored to participate and that his ability to contribute to this critical work to preserve the Amazon is largely because of the thousands of people who make up the global Pachamama Alliance community.

The Indigenous leaders responded by asking Bill to relay a message to the members of Pachamama Alliance around the world. They wanted to give thanks to everyone for their support, as well as to communicate that they see the Pachamama Alliance community as family rather than just allies.

The Importance of Thriving Rather than Just Surviving

As the conversation pivoted from Pachamama Alliance’s work in the Amazon to the pathway forward for humanity, Lynne shared her thoughts on how important it is for humanity to focus on thriving rather than simply surviving.

As she put it, if humanity’s focus is on surviving rather than thriving, this orientation can lead us down a path where we focus on finding ways to survive and manage in spite of the challenges and crises on Earth. The opportunity available at this time is to put our attention and intention on how to thrive in such a way that we are a contribution to the community of life. Lynne highlighted that this thinking is consistent with a regenerative future, one in which humanity can restore and rebirth who we are.

A Vision of the Future Grounded in Love and Possibility

In sharing her thoughts about how humanity can move powerfully into the future, Lynne also touched on the need for humanity to be guided by a vision of what’s possible.

Lynne pointed to Pachamama Alliance’s Indigenous partners and their vision for the Amazon Sacred Headwaters as a great example. She explained that although an important aspect of the Amazon Sacred Headwaters Initiative is to stop the destruction of the rainforest, the Indigenous people who created this initiative are also driven by a vision of what they do want as opposed to what they don’t want. Lynne continued, saying that this kind of vision is what humanity needs at this time so that we aren’t driven by fear, but rather by what we love.

Lynne invited everyone on the call to connect with and ask nature to help them envision the future because all of life is in this together. She elaborated further, saying that humans are not a super species, but just one of millions of species on Earth. She reminded us that we need those other species and they need us, because we are all part of the same community of life.

Bill added that having a bold vision of what’s possible allows people to collaborate powerfully. And that what inspires him and generates love—and possibility—for him is greater certainty of why humanity is here. For Bill, humanity is here to allow life to flourish and, specifically at this time, to regenerate life given how much life we as a species have destroyed in the last hundreds of years. As he put it, we’re here to be a part of life, and doing so can mean the restoration, regeneration, and flourishing of all life on Earth.