Voices of Indigenous Women: The Teachings of Our Current Crises 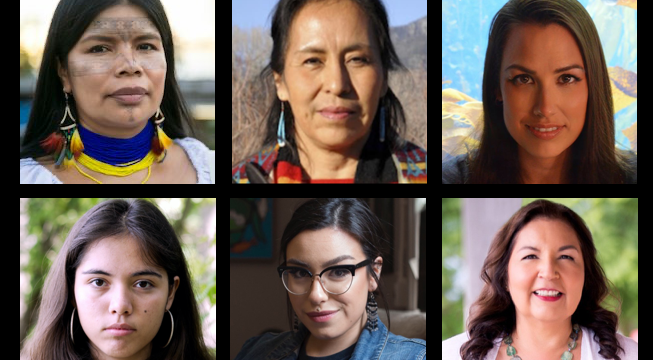 The following conversation was part of the Resilience and Possibility series. To watch the recording (in either English or Spanish), please scroll to the bottom of this post.

On August 10, Pachamama Alliance hosted Voices of Indigenous Women: The Teachings of our Current Crises in honor of International Day of the World's Indigenous Peoples. This panel discussion, which was moderated by Dr. Anita Sanchez, featured Indigenous women who each shared their unique perspectives and insights on the current climate and global health crises.

Below are a few key points from each of the panelists.

Selva Vivente: Bringing Balance to the Planet through Indigenous Wisdom

Patricia Gualinga, who is a Kichwa leader of the Sarayaku community, has been at the forefront of her community’s efforts to stop the destruction of the Amazon rainforest by the petroleum industry. Though this work is critical to addressing the climate crisis, Patricia believes more is needed to foster a deep change.

Patricia went on to explain that in order to bring balance to the planet, the world needs to hear and share the knowledge of Indigenous peoples. To this end, Sarayaku has brought forth a proposal called Selva Viviente or Live Forest. Selva Viviente is the recognition that Nature is alive, Nature has consciousness, Nature is entitled to rights, and humanity is not at the center of the world. Patricia made it clear that people must understand this if humanity is to coexist with Nature in harmony.

Because of the marginalization of Indigenous peoples, this ancient knowledge hasn’t been shared widely until recently. But as Patricia explained, it’s imperative that the global community comes to this understanding, especially as time runs out for frontline communities like Sarayaku. Otherwise, their struggles as the first line of defense will be insufficient and the destruction of the Earth will continue despite their efforts.

Why We Need Earth’s Wisdom

Pat McCabe (Woman Stands Shining), who is a Diné activist, artist, writer, international speaker, and ceremonial leader, shared some of the challenges facing her community in the wake of the global pandemic. According to Pat, her community is experiencing difficulties partially because of the governing system that was superimposed upon her community’s traditional ways. One example is the way in which the land allotment practices that were imposed have created competition for land that hadn’t existed when the community was able to practice traditional land management. As a result, many people are forced to live in crowded conditions that exacerbate the spread of COVID-19.

Given the challenges facing her community, Pat is seeing the ways in which human-made constructs create difficulties not only for Indigenous peoples, but for all life. As she explained, it’s difficult to receive the Earth’s wisdom if one is only surrounded by human-made constructs. And as the global pandemic is revealing, these human-made constructs—like the U.S. healthcare system—were not designed to prioritize life. Pat went on to explain that we can’t look to these constructs to answer “how can we put life back at the center?” We must instead open ourselves up to the wisdom of the earth, and invite the intelligence of all life into our midst.

Finding Resilience in a Time of Crisis

Xiye Bastida, who is a member of the Indigenous Mexican Otomi-Toltec nation and organizer of Fridays for Future New York City, spoke about the impact of facing multiple crises simultaneously on her community. Many people had lost their lives to COVID-19 and disasters such as drought put a strain on her small community. However, Xiye explained that despite this, “there’s this strong sense of spiritual resilience and spiritual strength.”

In the midst of multiple crises, Xiye’s community was able to clean the lake which Xiye’s community had fought to clean for the past 20 years. This lake, which Mexico City had siphoned in 1942, was a source of culture and tradition for the community, which had been a fishing community. When the lake had become dry, the community had lost that connection to its cultural traditions. Now that what’s left of the lake has become clean, there is a “new sense of regeneration, of reconnection, of reimagination of what the future could look like.”

We Need to be More Sociocentric and Tribal

Alexis Bunten, who is the Co-Director of Indigeneity at Bioneers, drew upon her experiences of having grown up in the Alaskan Aleut/Yup’ik community to speak to the importance of moving beyond individualism and embracing our responsibility towards the common good.

Though communities in Alaska have been able to keep COVID-19 cases fairly low by halting the cruise ship industry, this is not the case in Monterrey where Alexis lives now. Alexis attributes this to the “rugged individualism” that’s encouraged within the dominant culture in the United States.

As she explained, there are many tourists in Monterrey who aren’t thinking about the elders in the community, people who have recovered from COVID-19, or those who are particularly at risk. Alexis went on to say that we cannot put ourselves first at this time and instead, we all need to live in a “more sociocentric way, a more tribal way” in order to save everyone’s life. This is particularly important given vulnerable populations who face higher health risks, as well as marginalized communities who often lack the resources needed to address COVID-19 effectively.

Riley Yesno, who is an Anishinaabe woman from Eabametoong First Nation with extensive experience in Indigenous advocacy, spoke about the opportunity to create a different future that COVID-19 presents. As Riley explained, many things that were deemed impossible, such as universal basic income (or some form of it), are now coming to fruition. Her hope is that people’s perceptions of what’s possible and what they’re willing to demand—even in the absence of crisis—are expanded.

The recording in English:

Pachamama Alliance is honored to have offered this event in both Spanish and English with the help of Lina Amaya and Andrés Mauricio Gutiérrez. Their live translations during the event were critical to making this content accessible to everyone who participated in this event, including our panelists.