Over 500 Indigenous Women of the Amazon and Allies March for Climate Justice, Indigenous Rights on International Women’s Day 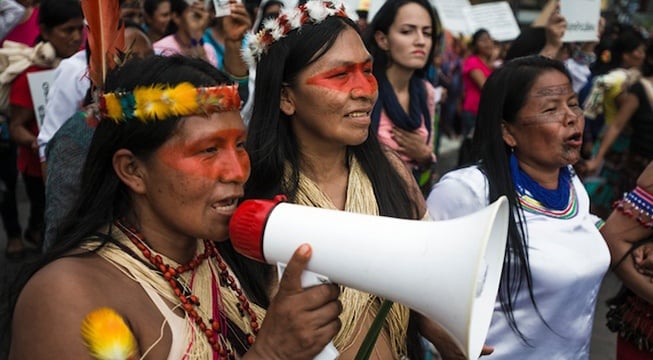 A Women's March to Express Opposition to Rainforest Oil Development

In January 2016, the government of Ecuador formally signed exploration contracts for two Amazonian oil blocks in indigenous territory—known as blocks 79 and 83—with Andes Petroleum.

The indigenous people in this region are strongly opposed to any plans for oil development and organized the Women’s March to express their opposition to these projects. They know the environmental and social disaster that oil development will bring.

Pachamama Alliance team members in Ecuador worked closely with our indigenous partners and with key NGO allies (Amazon Watch, Land is Life, Women’s Earth and Climate Action Network (WECAN), Acción Ecológica) to help organize and support the march and also to coordinate media outreach within Ecuador and in international press. Thanks to our generous donors we were also able to convene a gathering in Quito the day following the march at FLACSO University in where some of the indigenous women leaders presented to and intereacted with a gathering of 100 women academics, activists and political candidates to raise awareness of their position.

Belén Paez from Pachamama Alliance declared: "It's a unique and historical moment to have the experience of solidarity and connection between indigenous women and activists from all over the world standing up for the rights of the Amazon rainforest and its people, we have all been waiting for this moment for so long, and that moment is now."

With your support our indigenous partners can hold the line to protect their territories. It has worked in the past and it will again.

Your donation today will ensure that indigenous federations have the support needed to be able to make informed decisions about protecting their rainforest homes.

Below is a press release covering the march, produced by Amazon Watch, Women’s Earth and Climate Action Network, and Pachamama Alliance.

PUYO, Ecuador March 8, 2016 – In recognition of International Women's Day, Indigenous Amazonian women leaders of seven nationalities including: Andoa, Achuar, Kichwa, Shuar, Shiwiar, Sapara and Waorani nationalities and their international allies took action in Puyo, Ecuador, in a forum and march in defense of the Amazon, Mother Earth and for climate justice. Specifically, they came together to denounce a newly signed oil contract between the Ecuadorian government and Chinese oil corporation Andes Petroleum.

By plane, foot, canoe, and bus, some five hundred women mobilized from deep in their rainforest territories and nearby provinces marching through the streets of the Amazon jungle town of Puyo.

Chanting, "Defend the forest, don't sell it!" and carrying signs reading "No more persecution against women defenders of Mother Earth," the march culminated in a rally in which each nationality denounced the new oil threat and shared traditional songs and ceremonies. The women spoke of other methods for protecting and defending the Amazon and its vital living systems, making it known that the women of the Amazon are not just victims of environmental and cultural genocide, but rather are vital solution bearers.

In addition to highlighting the grave social and ecologic implications of this new contract and the Ecuadorian government's plans to tender several more oil blocks in the pristine, roadless southern Amazon, the women and allies brought light to their struggles and the ongoing criminalization faced as they stand to protect and defend their territories and lifeways based upon living in harmony with the natural world. A tribute was held in honor of Berta Caceres, the Honduran indigenous environmental leader who was killed last week for her years of work defending rights and territories from privatization, plantations, and most recently, a mega dam project.

The women of the Amazon were also joined by Casey Camp Horinek, WECAN delegation member and Indigenous leader of the Ponca Nation of Oklahoma, who shared her traditional songs and stories of how her people have been impacted by fracking activity.

"Right now the oil company is trying to enter our territory. That is our homeland, this is where we have our chakras (gardens), where we feed our families. We are warriors, and we are not afraid. We will never negotiate," explained Rosalia Ruiz, a Sapara leader from the community of Torimbo, which is inside the Block 83 oil concession.

"Although we are from three different provinces, we are one territory and one voice," Alicia Cahuiya, Waorani leader declared.

As the march unfolded, the Ecuadorian government and Andes Petroleum held a meeting in the nearby town of Shell to organize an illegal entry into Sapara territory, knowing that key leaders would not be present. Outraged, a delegation of Sapara delivered a letter to the meeting, underscoring their peoples' opposition to the oil project and governments tactics to divide the community. They successfully thwarted the government and company plans, and returned to the streets, victorious.

International allies including the Women’s Earth and Climate Action Network, Amazon Watch and Pachamama Alliance shared messages of solidarity and calls for immediate action to keep fossil fuels in the ground in the Amazon.

“On this International Women’s Day we are reaching across borders and standing together as global women for climate justice to denounce oil extraction in the Amazon and call for attention to the struggles and solutions of local women land defenders,” explained Osprey Orielle Lake, Executive Director of the Women’s Earth and Climate Action Network, “We all depend on the flourishing of these precious rainforests, the lungs of the planet. Now is the time to keep the oil in the ground and stand with the women who have been putting their bodies on the line for years to protect the forest, their cultures, and the health and well being of all future generations.”

"Today was a historic day for indigenous Amazonian women! It was the first time that hundreds of women and their allies marched for the Amazon, Mother Earth and Climate Justice. And the power of women was so strong that plans for oil companies entering Sápara territory today were halted. This is is a signal that the collective call to defend rights and territories by keeping fossil fuels in the ground is working," says Leila Salazar-López, Executive Director of Amazon Watch.

Belen Paez from Pachamama Alliance declared: "It's a unique and historical moment to have the experience of solidarity and connection between indigenous women and activists from all over the world standing up for the rights of the Amazon rainforest and its people, we have all been waiting for this moment for so long, and that moment is now."

The March 8 forum, action and press conference will be followed by a March 9 event and report back, ‘Women of Ecuadorian Amazon and International Allies Stand For Protection of the Amazon Rainforest’ to be held on March 9 at 17:00 at the Biblioteca FLASCO, Universidad FLACSO, Quito.

A solidarity action was also held at the Chinese consulate in San Francisco, CA, to denounce the new oil contracts on Sapara and Kichwa territory and support women's rights in Ecuador and around the world.